Great Britain has for a long time been considered as the greatest and most diverse wine market in the world. For centuries we have been able to buy fine wines from all over the world, yet traditionally, you wouldn’t buy wine made in Great Britain. But times are changing, and England is now firmly on the wine map, famous for producing world-beating wines from all over the South of England and beyond. These are proving hugely popular, both at home and abroad, and the only problem is that demand can outstrip supply! We all know the British weather can be unpredictable, but it can have serious consequences for winemakers: in 2010 there were 4.05 million bottles produced, while the poor summer of 2012 yielded just 1.03 million bottles (you may have noticed that we were out of stock of English wines for a long period last year – there simply wasn’t enough made!). 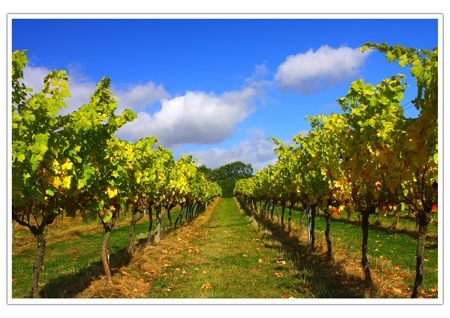 Our wine culture originally began with the Roman invasion, but didn’t flourish until William the Conqueror arrived. English wine then appears to have died out in the 14th Century due to a combination of worsening climate, and an increase in imports from France, Madeira, and Germany. The current wine revival only began in the post-war period, and now vineyards can be found everywhere from the Channel Islands to the Outer Hebrides! There are 128 wineries in England, with a total of 432 vineyards. These are mostly planted with well-known varieties like Chardonnay and Pinot Noir, which are great for sparkling wines (they are the same grapes used in Champagne), but some are more esoteric, with glorious names like Dunkelfelder and Huxelrebe. 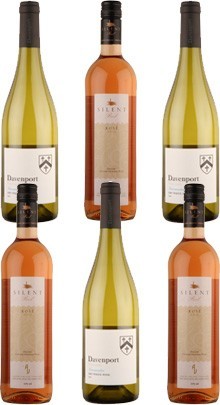 It’s great to support British producers (not much of a chore when the produce is lovely wine!), especially when they are organic. Organic vineyards are a fantastic way of keeping the British countryside at its best, increasing the numbers and diversity of wildlife, bird life, plants, flowers, bees, butterflies and much more. Plus there’s the benefit of great tasting wine with no chemical pesticide or fertiliser residues.

Davenport Vineyards (pictured above) was established over 20 years ago and has been a real pioneer in the English wine industry, especially with their use of organic and biodynamic methods. Their popular Horsmonden Dry White 2013 is now in stock. It’s made from five different grape varieties, but is similar in style to a New Zealand Sauvignon Blanc: plenty of aromatic flavour and a crisp, fruity taste.

Albury Vineyards are releasing their Silent Pool Rosé 2013 to coincide with the start of English Wine Week, and we are lucky enough to have a small allocation of this beautiful wine. The   first vintage of this wine was one of only three English wines served on the Royal Barge as part of the Diamond Jubilee celebrations in 2012. The vineyards are located near Guildford, in the picturesque North Downs, where owner Nick Wenman and team hand-picked organic Pinot Noir and Pinot Meunier grapes last year, to create this rosé. Master of Wine Stephen Skelton describes it as ‘Pale salmon pink, with distinct Pinot raspberry and strawberry tones on the nose. On the palate the wine has a lively fruit character, with balanced acidity and a good fresh finish’.