The day we went for a spin round Albury Vineyard

Earlier this year, during one of those moments of looking out of the window at the beaming sunshine, I thought to make a plan, to get out and visit one of our suppliers. We’re lucky in that we have so many dedicated, skilled and interesting suppliers, from all over the world. Thing was, it had to be just a day trip, and I was keen to combine it with a cycle ride. Joe our web manager and wine advisor here, is a keen cyclist and had his big 100 mile Ride London charity ride approaching, and another cycling friend, Andy (also an excellent photographer) was keen as well. Bingo! A long overdue visit to see Nick Wenman at Albury Vineyard in the Surrey Hills would be perfect. 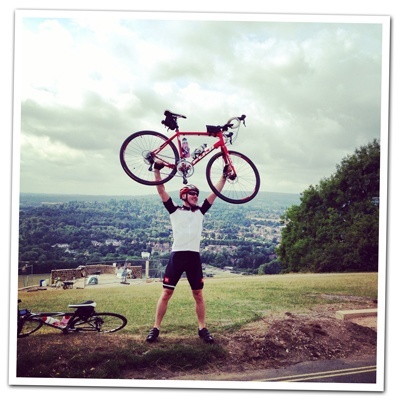 Joe after the Box Hill climb

And so it was, on Friday 1st August we drove off early, down to Surrey with bikes on roof. After a gruelling 45 mile cycle round the Surrey Hills, taking in Box Hill and Leith Hill to name two, we arrived back at our parking spot, a quiet lay-by on the A25 heading towards Dorking. Following a track up behind some trees, suddenly in front of us was revealed the stunning and well hidden Albury Vineyard. Neat rows of green vines stretching out and up into the gently rolling southern slopes of the North Downs. Quiet and isolated, there were just a couple of workmen finishing off a new barn/visitor centre, and there was a smiling Nick Wenman there to meet us, who proceeded to give us a tour and tasting too, before leaving us to explore further and take some photos. 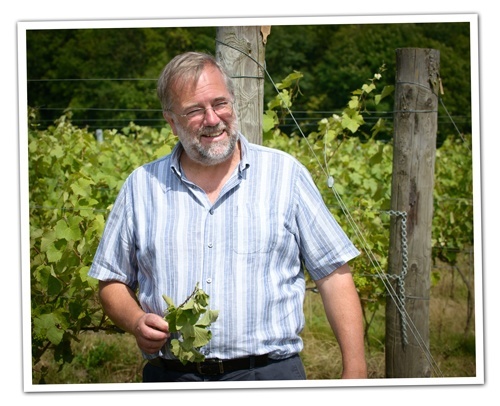 It was back in 2009 that Nick found his ideal spot to start his vineyard enterprise. Importantly, it was within walking distance from his home village of Albury, just a mile or so away. Five acres were planted out in 2009, this has now grown to 13 acres with some 21,000 vines. Chosen varieties are Pinot noir, Pinot Meunier, Chardonnay and a small amount of Seyval Blanc. Apart from Seyval these are of course the varieties that go in to Champagne, and Nick’s idea all along was to produce English Sparkling wine of the highest quality. No easy task and a long labour of love, with the first small production being set for release late 2014!

Nick has been mainly self taught, but has had help from various consultants too, including top UK viticulturist Stephen Skelton MW, who has helped plan the project from the outset. In 2010 Italian born Alex Valsecchi (she has the same initials as Albury Vineyard, a sign indeed!) joined as vineyard manager to help with developing the vineyard. The soil at Albury is clay on chalk, just the same as in Champagne, and at 100 metres above sea level, in a protected south west facing location, the building blocks for success were there. 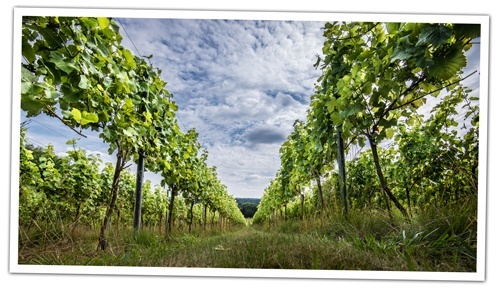 Between the vines at Albury Vineyards

Nick continued to tell us that his decision to go organic came early, even though some advised against it. Difficult enough to make a go of making wine here, let alone organic wine as the weather does not help and the problems with weeds in particular can be severe. However it was Will Davenport (of Davenport Vineyards  – East Sussex) who particularly inspired and gave him impetus to ‘go for it’. We’re glad he did!

As we climbed up through the vines, Nick would often pause to pull up a weed, or tend to a vine in some way, commenting that his trained eye doesn’t allow him to just walk past a ‘job’ that needs doing, proving it really is a hands-on job (21,000 jobs I guess!). Frost protection in UK vineyards is all important measure, and again for Nick and his helpers, it includes a human element. Following the installation of a weather station some years ago, if the vineyard temperature gets close to freezing point (as it does in the middle of the night!), it sends an automatic alarm to Nick (and helpers) to leap into action and get down to the vines and light some 700-800 candle burners dotted throughout, to avert possible frost damage disaster. Not so much up with the lark, as up in the dark! 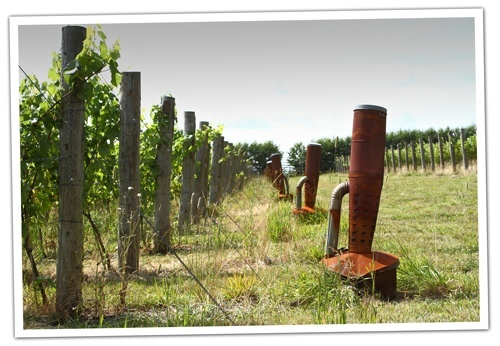 The first all important grapes were picked in 2011 (at about 40% yield), and 2012 found Nick burying his first cow horns, as he decided to take organic a step further by going biodynamic. 2012 also saw the release of their first wine, called Silent Pool Rosé from the 2011 vintage, made from Pinot Noir and Pinot Meunier which through a lucky break and fortuitous timing, was selected for serving on the Royal Barge at the queens Diamond Jubilee celebrations of that year. Nick recounted the story as we tasted a chilled bottle of his new Silent Pool 2013 Rosé, which slipped down a treat, with full flavoured and juicy berried fruits, and crisply tart refreshing acidity. Silent Pool Rosé 2013

Turns out we had walked past (we went back later) the Silent Pool on the way in, hence the name of the wine. Here’s the explanation directly from their website:

The Silent Pool is a lake of crystal clear water adjacent to the vineyard. The water feeding the lake comes from natural springs in the North Down’s lower chalk resulting in completely clear water with a beautiful blue green colour.

The pool has a genuine ancient history and may have been a prehistoric religious site. In the nineteenth century Silent Pool became a popular place to visit and in 1858 a local man from Albury, Martin Tupper, wrote a story about the pool which has now become folklore.

The story tells of a beautiful young woman, Emma, who took to bathing naked in the pool. Prince John heard of this and rode up to see for himself. He arrived to see Emma hanging from the branch of a tree, dipping in and out of the water. Emma saw John and his men arrive and tried to escape by wading deeper into the water. John pursued on his horse until Emma, out of her depth sank beneath the water. Her brother tried to rescue her but also drowned. The story ends by claiming that Emma’s ghost now haunts the pool.

Nick also told us that the Pool was drained in the 1920’s by the police when they were searching for a missing Agatha Christie. She was later found in Yorkshire! By this stage Nick had opened a mysterious looking bottle containing a clear liquid (spooky!), and was asking us to sample something unusual made from Seyval Blanc. It turned out to be an amazing Grappa or Eau de Vie, produced from his young wine from Seyval grapes that had turned out too acidic. Terrific stuff which Nick assured us goes very well with a few squares of dark chocolate late at night. Sadly as yet, this is not a commercial product.

At time of writing Nick will no doubt be keeping a close eye on the weather, which is crucial in the final stages of grape ripening. Quantity as well as quality is often in close balance right up till harvest. The 2012 was notoriously poor for UK wines, when Nick had just 3 tonnes of grapes, compared to 2013 where 25 tonnes were picked! 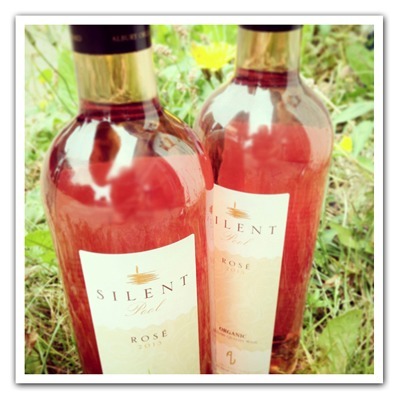 So Nick’s dream and culmination of many hard years work, edges closer as a couple of vintages of Albury vineyards first sparkling wines are now maturing in bottle, the early signs are very good, and with luck we maybe able to experience the first ever sparkling wines from this corner of the Surrey Hills before the end 2014. It’s rumoured around 1500 bottles may be ready, it will no doubt be anything but ‘silent’ in the area after that!

Try the Silent Pool Rosé 2013 before it sells here.