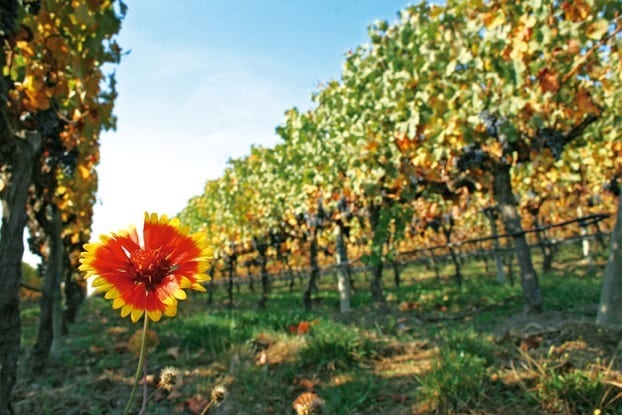 Curiously Intriguing Carmenere
The Carménère grape (as you might tell from the accents) was originally planted in France, in the Médoc to be more precise, where for many years it worked well with Cabernet Franc and later Merlot and Cabernet Sauvignon to produce classic Bordeaux wines.

The name Carménère originates from the French word for crimson (carmin) which refers to the vivid colour of the varieties autumn leaves. Indeed, the grape also has dark skins and produces intensely deep coloured red wines. However, the skin and colour intensity of this variety did not help it when in the 1860’s phylloxera (the grape louse), devasted European vineyards. Carménère, was particularly susceptible, and as the variety did not graft well either, it was largely abandoned when phylloxera resistant American rootstocks were introduced.

So how did this become a Chilean classic?
Prior to the phylloxera outbreak, some enterprising Chilean vignerons had taken what they thought were mainly Merlot cuttings from Bordeaux vineyards, back to Chile. As it turned out, it was the fact that Carménère and Merlot look so similar, that saved
Carménère from extinction!

In Chile the mistaken Carménère vines thrived in the dry, warm valleys around Santiago, where there was no spread of the phylloxera disease either. And until relatively recently all Carménère grapes were harvested as if they were Merlot grapes, and it was wondered why Chilean Merlot tasted a little different to other Merlots from around the world!

It was in 1994 that a French professor from Montpellier (funnily enough) researched the DNA of the variety to be able to confirm, it was indeed Carménère, and not Merlot. The Chilean Department of Agriculture officially recognised the variety in 1998.

We heard about this amazing wine tale on our trip to Chile in 2003 whilst visiting the first organic and biodynamic estate there, now known as ‘Emiliana’. We were able to taste the differences in the varieties and hear about enthusiastic plans to develop single variety Carménère wines.

Here’s the most recent vintage, and it’s in our promotion too. It’s also just won a Gold medal at the 2013 Millésime Bio organic wine competition in Montpellier.

There’s more to the Carménère story and Vintage Roots, as in 2010 we formed a relationship with our other Chilean wine agency ‘Nuevo Mundo’. Now this estate traces Carménère back even further and is able to claim having made the first and original 100% Carménère wine from it’s Maipo Valley vineyards.

Carménère wines are generally good matches with spicy foods, particularly curries. Why not give them a try?