Anoraks on! Preferably have a glass of something organic and delicious in hand, a Wine List or our website to view, settle down and we’ll explain a little about the Vintage Roots product code system and how it came to be. Hopefully, it might make you go ‘oh, now I see’ or ‘that’s useful to know’ or even ‘well I hope they stick to sourcing great wines, rather than trying to be code inventors supreme’

Good stuff did happen in the 1980’s, for example we started our business and released our first ever Wine List on a sheet of A4 paper, which consisted of just 12 wines from France. Stored in our shared terraced house in Reading, we knew where they were, how much we had left and what they were called. The minimal sales we did make were invoiced by hand, on duplicate carbon paper. There were no fax machines, computers, internet or mobile phones!

Anyhow, enough nostalgia – you get the picture, things were more ‘primitive’ back then, simpler, slower. (‘Slow Business’ like ‘Slow Food’, there was enjoyment and fulfilment in the process).

Time passed, our business grew, we started employing people, got vans, premises, even computers at which point we had to invent a code system for our 100 or so strong product range. Everything we did was ‘first off’, you made it up as you went along and coped and adapted with fallout later. 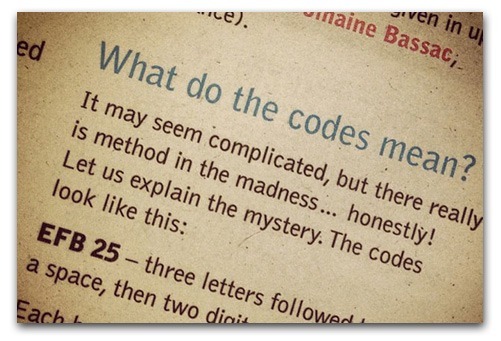 AND SO IT WAS
We made a code system which was three letters followed by two numbers. The letters were to carry a meaning, whereas the numbers did not. (EG – ‘AFZ 03) We’re still using it now, so in retrospect it’s not done so badly!

First letter
A – ALL CHAMPAGNES
B – ALL SPARKLING WINES
C – ALL WHITE WINES
D – ALL ROSE WINES
E – ALL RED WINES
F – ALL FORTIFIED WINES AND FRUIT WINES
G – ALL LIQUEURS
H – ALL SPIRITS
I –   ALL BEERS
J –  ALL CIDERS
K – ALL JUICES OR CORDIALS OR MIXERS (ALL NON ALCOHOLIC)
L – ALL MIXED CASES (AND BATCHED PRODUCTS)
M – OILS (WE USED TO SELL OLIVE OILS!)
O – ALL COFFEES
P – ALL PORTS
V-   ALL VINEGAR (YES VINEGAR TOO!) NOW VOUCHERS
X –  ALL CHOCOLATE PRODUCTS AND MULLING SPICES

Second Letter and Method in the Madness

Generally in 95% of cases a rule applies, although there are exceptions. The second letter would ideally describe the country of origin, so ‘A’ would denote an Austrian wine, ‘C’ would mean a Chilean wine, and so on.

So what of ‘G’ – first we had some German wines, but then we had Greek wines too, so what were we to do. After the panic died down and meetings concluded ( I jest!) we came up with ‘D’ for Greek wines, well there had to be a reason and a way to remember it, so at the time (all those years ago) the Drachma was the Greek currency and it began with ‘D’. The same was for South African wine after Spanish wine, we used ‘R’ (as with S.African ‘Rand’)

Third letter could be useful too

But not always! Sometimes it’s used to describe a region within the country, though to be honest we soon ran out of options. For example all EFB products are red wines for the ‘E’, French wines for the ‘F’ and the ‘B’ means from southern France Languedoc/Roussillon in particular. A third letter ‘A’ as in EFA, the third letter will mean all those red wines are from the Bordeaux region.

The two numbers after the letters are rotational and we keep using them in an upward cycle, unless other lines are delisted and the previous number becomes available again.

Phew! Still with us? Well done – so we hope the codes and knowing what they mean can help you a little, for example you can simply enter any code in the search box on our website, and it will bring up the relevant product for you and we hope to have a ‘Quick Order’ facility on our new site where you can order just by tapping in the codes if you know them.

Remember that if you re ordering by phone, some of the letters sound very similar when spoken, for example ‘F’ and ‘S’. It could mean you receive a Spanish wine instead of a French wine so please be careful!

Sadly quite a few of us here know the codes off by heart, we just can’t help ourselves!