The Equation of Your Wine (Pre Budget March 2013)

Let’s not get too bogged down in the maths, but it’s worth taking a look at the three examples below with selling prices at £4.99, £6.75 and £9.90 to demonstrate that as you pay more per bottle, an increasingly higher percentage, is actually for the stuff you enjoy, – the wine! 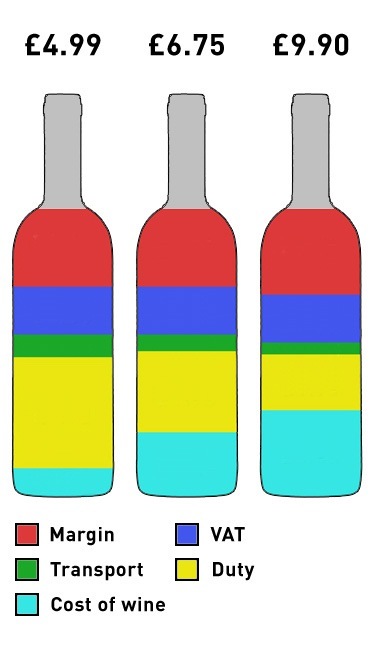 At the lower priced end, it’s nearly all fixed costs and taxes (at £4.99 a massive 55%) In short and without surprise you get a better drinking experience by paying a bit more.

Certainly above the £15 price mark, wine appreciation and knowledge will start to play a larger part in what enjoyment and value is to be had from your bottle, and of course this is subjective. At Vintage Roots we buy wines across a wide price spectrum, but a lot of our focus is in the £7 – £12 range where real affordability and organic quality meet.

There’s a whole bunch of these, such as grape type and indeed the area or even country it is grown. For example grapes from Chablis will most likely be more than double the cost of the same grapes from the Languedoc, where land is cheaper. The cost of labour varies with countries such as S.Africa and Chile being cheaper than France. The push and pull of varying currency exchange rates and any weakness of the pound can have profound influence on price also.

Yields in the vineyard are also a factor (remember lower yields meaning better quality), and hand picking compared to machine harvest, whether the wine is aged in oak, and so it goes on. Weather during the vintage regularly cause problems with losses of between 5-50% not uncommon. One of our producers a few years ago lost more than 80% of his crop in a ten minute hail storm! Being a wine (especially organic wine) producer can be a tough and unpredictable career!

As previously said, organic and biodynamic wines have many of the same fixed costs and taxes as ‘normal’ wines, but you may wonder why in general and specially at the cheaper end they tend to cost a bit more. It is because yields are often lower and work on an organic vineyard is more labour intensive, There is a also a small (tiny in percentage terms) cost for organic certification, harvesting most commonly is done by hand and with organic, there is no safety net for the crop, in case there’s an issue with pests or disease. All Vintage Roots wines are certified organic and this ensures that our customers receive a ‘real’ organic product rather than a ‘maybe’.

Duty Increases over the years